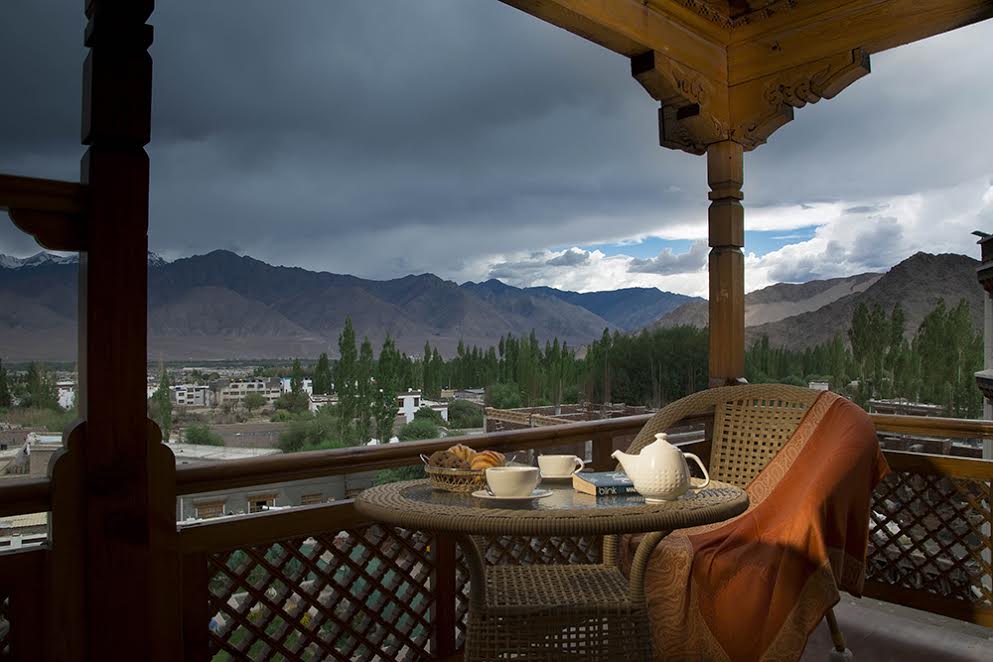 The Grand Dragon Hotel Ladakh, located at a height of 11,562 ft in Leh, Ladakh in the Himalayas, holds a place of pride in the hearts of the locals as it was the first international hotel set up in this isolated outpost. Since 2007, this hotel, built despite the challenges of its location at a high altitude, redefined hospitality in Lehsetting a benchmark for other establishments that came up subsequently.

Today, The Grand Dragon Hotel continues to uphold the high standards and is the preferred hotel for upscale travellers looking for luxury and comfort. Owned and managed by the ABDU family, it is part of the Dragon Group of Hotels. Known for their passion for hospitality, the ABDU family has been in this business for the past three decades.

Minutes from the airport and situated in heart of the city, The Grand Dragon Hotel was developed and conceptualized by brothers Ghulam Mustafa and GhulamMohiuddin. This indigenously designed hotel’s architecture incorporates the famous Rabsal tradition of Ladakh, visible in the treatment of windows and balconies.

The rooms offer stunning views of the picturesque landscapeand the lofty Himalayan peaks. The Grand Dragon Ladakhhas 82 rooms with the addition of a new wing. There are 31 premier rooms, three suites and 48 deluxe rooms in the original wing. The rooms are spacious with en-suite bathrooms and separate shower stalls.

At the entrance are a pair of dragons, ubiquitous in Ladakh and considered a symbol of enlightenment, these can be seen all over Leh carved over roofs, gates of temples, furniture etc.

The Grand Dragon offers two dining options, Zasgyath, thecoffee shop and Tusrabs, an intimate dining area, serving a range of cuisine delicacies to regular Indian fare as well as Chinese and European dishes. The hotel also has specially designed banquet areas to host conferences for up to 200 people and other celebratory events both indoors and outdoors in the sprawling lawns.

There is also a fully equipped gym, sauna and steam roomsand massage chairs. Along with that there is also activity centre for kids and billiards room located on the premises. A well-stocked store within the hotel offers guests a peek in to the various arts and crafts of the region.The hotel has a doctor on call to ensure that guests remain in good health.

Leh, once a pit stop on the Silk Road for traders, Buddhist monks or adventure seekers in the years and centuries gone by, is now on many travellers’ bucket list. Leh is the largest city in Ladakh and easily accessible by air with daily flights from India’s capital New Delhi, and cities like Srinagar, Jammu, Mumbai, as well as by road from Himachal via Leh –Manali Highway, 473kms, and Srinagar via the Srinagar-Leh road, 434 kms.

Ladakh, also known as the “Roof of the World”with some of the world’s highest motorable roads, has numerous sightseeing areas and ancient monasteries. Also travelers can enjoy the traditional music and masked dances, during popular festivals like Losar andHemis. While the landscape is a photographer’s delight, it also offers fabulous opportunities for adventure sports for both amateurs and professionals alike. The local markets, within walking distance from the hotel, have an exquisite collection of coral jewelleries, metal and woodwork and colourful masks and charming Tibetan bric-à-brac.

The Grand Dragon Hotel is an ode to Ladakhi heritage fostering sustainable tourism in the vast unspoilt beauty of Ladakh.As they say in Ladakh, Julley! Or Welcome to The Roof of the World!

Flat 20% Discount on all Room Categories